Words With Friends is Networking, but Fun! 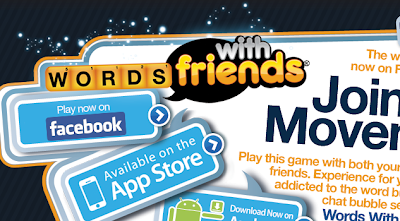 When our younger daughter was home for Christmas, she and her boyfriend, James, introduced me to a "new" game. When I snapped the photo below and asked what they were doing, Falon said, "playing Words with Friends." What's that said I, and went over to look at their Droid phone. Then I smiled, to which Falon said, "What's so funny?" 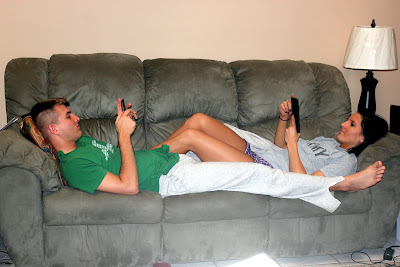 It's just Scrabble on a portable computing device, sometimes called a cell phone.

A play on words. With Friends. Without the board, or the lost pieces, and everyone asking who lost the Q, or, how come we have no more blank tiles?

It is "Ubiquitous." I can chat, and if I could be as clever as my son-in-law, then, too, I could respond to his taunt him with a clever 40 point play in retort to his recent and nicely laid tiles. (Michael, that was really cool, BTW). So, while I waited for family to finally join me at the car the day after Christmas, I could "go" to my office and catch up on FB, W-W-F, untold emails, and relax on a sunny day at Sawgrass Recreation Park.

Back to this idea of having your notepad everywhere you go; who carries pen and paper anymore? Or 3x5 cards and a pencil? Hardly anyone I know. After all, I don't want to look like the nerd I was in high school with my pens, pencils, and slide rule stuck in my pocket protector. That is why sometime in 2000 I became an early adopter of a Pocket PC; my wife only had an old Palm Pilot (remember that name). These PDA's (portable digital assistants) simply gave themselves a fancy name for what others might call a small day planner with battery that could fit in your pocket. Sort of. During those short periods of time when I had not misplaced my stylus, I would write on the screen; the PDA would translate to text and I could send those SMS messages faster than anyone still using their old-school T9 adaptive text.  (Cheryl, that's a hint. T9 is so 25 minutes ago).

Ubiquitous? Well, kind of. It did go everywhere with me; after all, it's primary duty was pretending to be a very cool looking phone, a status symbol with function, and did I mention touch screen dialing? Wow, I could "sync" it to my calendar, (when tethered to my desktop PC), and load updates to my address book (we call them "contacts" now, don't we?) I could load my music and photos, until I discovered the limits of a 512MB memory chip. But, gee, look how small (cool) that memory chip is!  He he.

Pen and paper started creeping back into my pocket. Not sure when, but by the end of that year, I realized my PPC just wasn't as convenient as I told everyone it was. When the tablet PC arrived at a box store near me, I had to have one. Bigger screen. Windows XP on electronic steroids. Stylus was tethered. It was computer, day planner, note taker, and a really awesome conversation piece. Look, I said, I can even use this to take notes, by scribbling on the screen. It would change the scratching to actual text using OCR technology onto something that was the forerunner of what M$ today calls OneNote. Finally, I could go back to my old school cell phone and carry my impressive tablet to meetings. For a while, because it got too hot. And it was heavy, the battery didn't last long, correcting the OCR translations took too much time. Pen and paper crept back into my shirt pocket; ubiquity is more than being omnipresent; it means being able to do the right action, at the right time, at the right place, with the right person(s). Anytime. Anywhere. Anyplace. Then in February this year I discovered the Droid. The iPhone for the common man. Open source. Free apps. The wave of the future. Hmmm. Seems like Steve Jobs said something like that in January 2007. The PDA was ancient. I had returned to coolness.

As 2011 took me on interesting twists and turns, each day brought new understanding of ubiquity because each my Droid Global had found a new app for that day's new challenge. It really is my portable office, complete with scanner, faxing, phone, note taker, workout tracker, camera, camcorder, calorie counter, video trainer, boom box, and some kind of really cool backup device, something Jobs kept calling "the cloud." No more tether cables except to charge up the battery.  (Note to Google: improve the operating system, because battery life sucks, unlike my iPod which lasts for days, not hours, on a single charge). Thanks goodness for my backup device. Hmm. Google says they invented it first, this cloud thing.

at 7:28 AM
Email ThisBlogThis!Share to TwitterShare to FacebookShare to Pinterest
Labels: Email android