Doc's Back with Basic Cardio 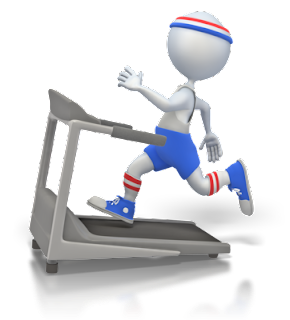 Yes, I know that it has been a while. The first quarter of this year has been extremely busy. Faced with choices in how to spend time, blogging was moved to the bottom of the list so that I could keep exercise near the top. If you follow my Facebook or Pinterest feeds, you know that running or jogging has been a regular part of my routine. I will admit to not being at the gym during January and February. But, I have done that the last two years to avoid the "New Year's Resolution" crowd. In the meantime it was JourneyGym and Kettle Bells here at the house along with good old fashioned calisthenics. And the running. And the elliptical machine on the patio when it was raining and the pool when it was sunny.

Last week I resumed my half-mile walks to the local YouFit for strength exercise and worked in about six miles of running, jogging and walking. And I still keep track of my daily eating on MyFitnessPal.com. Which leads me to the subject of today's post. Cardio.

If you want six pack abs, or a better looking behind, exercise might help, but what you eat, when you eat and how often you eat are where you need to start. +Matthew Manciagli is the author and his explanation of how eating right is so important to burning calories I just had to share  it with you. To whet your appetite (pardon the pun), here is an excerpt from his article last year titled: Cardio Concepts and High Intensity Interval Training (HIIT).


The Basic Concept of Cardio

Ok, time for me to get “automotive” on you:  I want you to think of a car that has two gas tanks; a standard tank, and a reserve tank (where unused fuel automatically gets deposited unused at the end of the day).  In the morning, this car fuels up its standard tank so it can drive around (keep in mind that at this point the reserve tank is empty).  At the end of the day one of three things would have happened if that car was driven;  1) The car’s tank was filled up with just enough fuel  to precisely drive the exact amount of miles needed for the day.  In this case, no fuel would be deposited in the reserve tank.  2) The car used up too much fuel (or it did not have enough fuel put enough in from the start) and it was unable to dive the required daily miles.  In this case, no fuel was deposited in your reserve tank.  3) The car used enough fuel to accomplish the amount of miles it needed to drive, but still had some fuel left over (from either over-fueling,  driving a route that required less consumption of fuel, or a combination of both).  In this case, the additional fuel that went unused was deposited in the reserve tank.

Read the whole article over at Fitness Logix.


Be sure to get some breakfast, and take a Protein Bar with you.